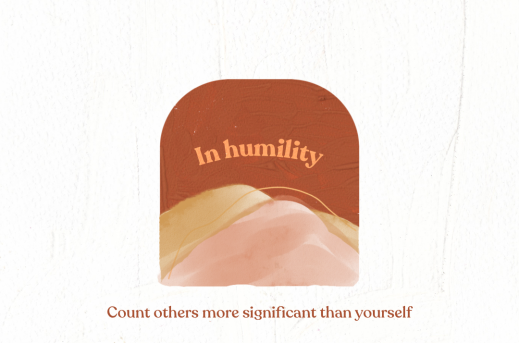 1 So if there is any encouragement in Christ, any comfort from love, any participation in the Spirit, any affection and sympathy, 2 complete my joy by being of the same mind, having the same love, being in full accord and of one mind. 3 Do nothing from selfish ambition or conceit, but in humility count others more significant than yourselves. 4 Let each of you look not only to his own interests, but also to the interests of others. 5 Have this mind among yourselves, which is yours in Christ Jesus,6 who, though he was in the form of God, did not count equality with God a thing to be grasped, 7 but emptied himself, by taking the form of a servant, being born in the likeness of men. 8 And being found in human form, he humbled himself by becoming obedient to the point of death, even death on a cross. 9 Therefore God has highly exalted him and bestowed on him the name that is above every name, 10 so that at the name of Jesus every knee should bow, in heaven and on earth and under the earth, 11 and every tongue confess that Jesus Christ is Lord, to the glory of God the Father.

In Philippians chapter 2 Paul calls the Philippian church  to serve one another in humility. This selfless service comes from their one-mindless in Christ through the Spirit. In Christ they have the ability to serve like Christ, who though being God, became human  and humbled himself to the cross for our sake. In his humility, he was exalted so that we could live out the same humility and obedience through him, also being exalted in his name.

At first glance, this passage could simply reveal to us an example of humility. In our own understanding we can take this and say that service means giving all that we have and obeying those who ask anything of us, even to the point of death.

Even Paul tells the Philipppians later in the chapter that he would be glad to be poured out like a drink offering upon the sacrificial offering of their faith. He uses Timothy, whom he says is genuinely concerned for their welfare like no one else, and Epaphroditus, who nearly died for the work in Christ on the behalf of Paul.

So, are we simply to serve others by giving our all to the point of death?

I think that in order to understand this call to serve we need to look at how Jesus serves and how Paul and the others he mentioned serve in light of their devotion to Christ. How did Jesus serve not only the world, but us as individuals? The greatest gift we could ever receive is that of Christ and the greatest service that has ever been done is Jesus’ work on the cross for us. These we have received by means of the gospel through the Holy Spirit. If we read carefully, Paul is not saying to serve others just because Jesus served to the point of death. He’s saying that what Christ did is the substance of our service. Christ’s death wasn’t an attribute of his service, it was his service. Every miracle he performed and blessing he bestowed served as a foreshadow of his ultimate future service and gift. So, when Paul serves to the point of death, he means that he serves the gospel to the point of death.

22 But you know Timothy’s proven worth, how as a son with a father he has served with me in the gospel.

Even when he mentions Timothy’s service he says that he has served with him in the gospel.

As we think of how we are to serve others we have to look to Christ’s example. We are not humbling ourselves to each other but humbling ourselves to God who gives us the power to count others more significant than ourselves. That means that we think about the interests of others before our own. What is the best interest of others? To know Christ. The Bible stresses that we use our physical means, if we are able, to give to the poor and needy. But ultimately, the greatest gift you can give and the greatest service you can perform is sharing the gospel of Jesus Christ.

This is how we can accomplish Paul’s call to the Philippians today to shine as lights in the world. We are lights that do not point to ourselves or shine on our own works of service. But we ourselves are being shined on by the light of Christ because we are holding fast to the word of life. We are pointing to Jesus who has served the gospel to us through his own life, death on the cross, and resurrection.