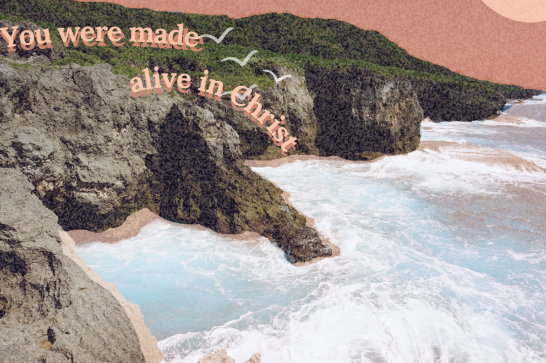 6 Therefore, as you received Christ Jesus the Lord, so walk in him, 7 rooted and built up in him and established in the faith, just as you were taught, abounding in thanksgiving.

8 See to it that no one takes you captive by philosophy and empty deceit, according to human tradition, according to the elemental spirits of the world, and not according to Christ. 9 For in him the whole fullness of deity dwells bodily,10 and you have been filled in him, who is the head of all rule and authority. 11 In him also you were circumcised with a circumcision made without hands, by putting off the body of the flesh, by the circumcision of Christ, 12 having been buried with him in baptism, in which you were also raised with him through faith in the powerful working of God, who raised him from the dead. 13 And you, who were dead in your trespasses and the uncircumcision of your flesh, God made alive together with him, having forgiven us all our trespasses, 14 by canceling the record of debt that stood against us with its legal demands. This he set aside, nailing it to the cross. 15 He disarmed the rulers and authorities  and put them to open shame, by triumphing over them in him.

Our gift in Christ is not just a measly gift, It is a treasure; the ultimate treasure. Paul poses a good question and one I think is helpful for continuing in our spiritual maturity. Are we living as if we are alive in Christ? The fruit of spiritual maturity is living the way God called us to. This does not end with following God’s rules. In fact, Paul says to not let others disqualify our faith through burdensome religious laws. Walking in the light of Christ means we will not only live righteously but that we will live joyfully. A spiritually mature Christian “reaches the riches of full assurance of understanding of God’s mystery, which is Christ in whom are hidden all treasures of wisdom and knowledge.” The knowledge and wisdom of God has been revealed to us through Christ and it is not only a gift but a treasure.

A life in Christ is a rich one in which we are continuously rejoicing in his life, death, and resurrection. Religion and legalism is a spiritual struggle and one of the most deceiving ones because it looks like righteousness. But God has disarmed the spiritual authorities and rulers by canceling our debt and nailing it to the cross. Satan lies to us by saying that we are still the accused, that we are still guilty. He makes us think that we need to atone for our own sin and get rid of our shame. But Jesus did this for us and we need to live like it. We need to rejoice, we need to give thanks, we need to treasure Jesus. This is essential and foundational to our spiritual growth. If we can’t find joy in our spiritual walks we are missing the crucial point. Jesus does not give us a new burden, he has lifted it. Let us reflect on the fact that we are made alive in Christ and now let us live like it.

The Gift of God